Dalian, July 3, 2019—Tang Ning, founder and CEO of CreditEase, attended the World Economic Forum’s Annual Meeting of the New Champions 2019, also known as Summer Davos, in Dalian, China, from July 1 to July 3. He shared his views about Chinese science & technology (S&T) innovation enterprises, corporate social responsibility, family (business) succession and wealth management markets. This meeting was joined by over 1,800 leaders from business and government as well as experts and scholars from more than 120 countries and regions to discuss and shape views about the current status and growth of the global economy. Senior Chinese government officials including Premier Li Keqiang, Wang Zhigang, minister of science and technology, and Hao Peng, director of the State-owned Assets Supervision and Administration Commission, attended the meeting. 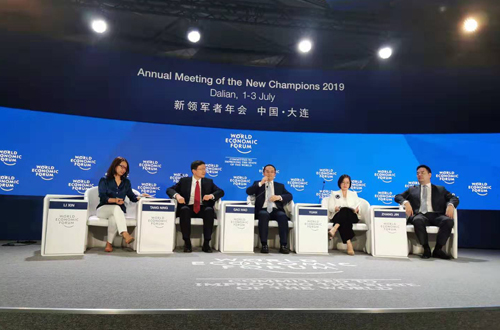 Tang Ning, founder and CEO of CreditEase, attended the Annual Meeting of the New Champions in July in Dalian, China.

As guest of the Annual Meeting of the New Champions, Tang noted that establishing an ecosystem to stimulate the technology innovation and help startups to grow would drive China’s economic and social growth. In China, S&T innovation enterprises need long-term capital support, and the development of FOF plays a role in making up for the deficiencies in traditional finance. Successful entrepreneurs in the traditional Chinese economy have created tremendous wealth and expect to embrace new economy. However, it is too risky to invest in a single enterprise, a single project or a single fund. On that account, they could hold a portfolio of top sub-funds under an FOF to diversify their risks and invest in leading enterprises involved in the new economy.

An FOF represents pooled investment funds that invest in other types of funds. Tang went on saying, “As a matter of fact, FOF is the ‘mother’ of many other excellent venture capital funds. Its portfolio contains many other investment funds, and these holdings replace direct investment in stocks, bonds and other assets. Capital flows from FOF to a certain type of fund and then to high-tech firms,” Tang said.

Tang held that business succession is not merely a concern challenging mega enterprises, but also one troubling about 2 million first-generation Chinese entrepreneurs, given that they need to pass on their fortunes, which combined are worth over 100 trillion yuan, as well as their corporate cultures, to the next generation in a short period of time. This is a major social and business concern never seen before in China. To remain competitive, enterprises should identify leaders and managers with top-notch expertise and an artisan spirit to foster truly exceptional qualities, while pushing forward the investment and succession of the first and second-generation Chinese entrepreneurs.

It was also observed by Tang that China’s wealth management market is undergoing five major shifts: from fixed-income investment to equity investment, from the domestic market to the global market, from short-term speculation to long-term investment, from single products and single opportunities to asset portfolios, from wealth generation by first-generation entrepreneurs to succession by the second generation of entrepreneurs. If financial institutions wish to beat their competitors, they must develop international competence, investment competence, S&T competence and the competence in providing comprehensive services.

According to Tang, CreditEase is currently focused on two “main battlefields” in wealth management. First, over the past five years, it has targeted high-net worth and ultra-high net worth Chinese investors, providing face-to-face and one-on-one personalized services to address their investment and succession concerns. This business is growing rapidly and healthily. Second, it seeks to build a client base of affluent investors, a segment of its wealth management business considered to be “the next goal.” To this end, it will apply international competence, investment competence, S&T competence and the competence in providing comprehensive services fostered in the first “battlefield” to this second one.

As Tang said, entrepreneurs should have foresight. On the one hand, foresight motivates them to learn from and draw on the successful experience of developed countries; on the other hand, to have foresight is to be keenly aware of the importance of teaming up with the most innovative groups and to be highly sensitive to state-of-the-art technology and model innovation. Future-oriented entrepreneurs are able to reform management every five years so as to accurately identify and capture future customer demand. Also, to form a strategic cooperate social responsibility framework will achieve better results. An enterprise will secure greater progress when it combines its main business with its corporate responsibilities and make long-term strategic investments.